You are here: Home / Corporate Management / How Will Singapore’s Economy in 2016 Affect Your Business?

Singapore is known worldwide as an entrepreneurial haven for many years because of its strategic tax exemption scheme, solid financing options, friendly business regulations, and growth-driven programs being provided by the government for business owners and entrepreneurs.

But as economic forecasts for the country in 2016 weave a patchwork of opportunities and challenges, should small business owners worry about treading a blurry future?

The uncertain economic environment has been one of the challenges for many business owners in Singapore last year, according to the National Business Survey by the Singapore Business Federation (SBF). Other concerns were high costs and slowing sales growth. Results also indicate that 54% of respondents have been adversely affected by the economic climate, a 35% increase from last year’s survey.

To address the quandary, it is important for entrepreneurs to understand the current state of the Singapore economy, navigate through its key growth industries, assess global and regional trends,  and develop the right business strategies.

The Ministry of Trade and Industry Singapore reported that the country’s economy grew by 2.0 per cent on a year-on-year basis in the fourth quarter of 2015, and by 2.1 per cent for the whole of 2015. “Although the economy has ended 2015 with a fairly healthy growth pace in the fourth quarter, overall GDP growth is still the slowest in six years,” DBS Singapore senior economist Irvin Seah said.

“Going forward, growth outlook in the next six to nine months will remain tepid before an improvement in the later part of 2016 can be expected. This should bring overall GDP growth for 2016 to 2.1 per cent,” he added.

The vibrancy of economic predictions for Singapore changed due to various scenarios, and the most palpable one is China’s economic slowdown. Economists assert that the situation has an impact on Singapore, particularly in its business sector and employment condition because the two nations enjoy strong trade relations in the services sector, investments, and tourism. Barclays economist Leong Wai warns that Chinese import demand is also declining, partly because of the weak yuan, and this would be felt by China’s trading partners and suppliers in Asia, particularly Singapore factories.

“Singapore will be among the hardest hit in Asia, apart from North Asian economies like Hong Kong, South Korea, and Taiwan,” OCBC economist Selena Ling admitted. But she stressed that all these forlorn estimates assume that the Singapore government would not take action to ease the said impact of China’s economic turmoil.

Another critical issue being addressed by the Singapore government is labour productivity. Figures released by the Ministry of Manpower in September 2015 suggest that total employment growth has continued to slow amidst weaker economic conditions and labour productivity remained weak. During the first half of 2015, productivity in the manufacturing and construction sectors dropped by 2.0% and 0.1% respectively.

“Both cyclical and structural challenges are dampening the growth prospects of this sector. External competition, rising business costs, and weak external demand were key challenges facing the manufacturing sector for the past years,” Seah said in an interview with Channel News Asia.

These scenarios quite mirror some of the most pressing business concerns faced by entrepreneurs in Singapore in 2015, as shown by the results of the 2015 SME Development (SMED) Survey released by DP Information Group in November 2015.

But Lincoln Teo, Chief Operating Officer of DP Information Group, is optimistic that the domestic pressures can help SMEs step up their game. “SMEs are taking positive steps to adapt, survive and ultimately succeed. While some SMEs are struggling to adapt, others are transforming into the type of modern and efficient businesses that will sustain Singapore’s economic success,” he said.

The challenge to businesses

The data released by DP Information Group in November 2015 revealed that a majority of SMEs did not experience much growth, with 53 per cent experiencing zero or negative turnover growth while 47 per cent recorded zero turnover growth but are deemed to be in a state of transition.

The good thing about this figure is businesses are taking action, wrote Jeremy Han, director of Corporate Strategy for the Adam Khoo Learning Technologies Group and a certified Gazelles International Business Strategy Coach. He said that among the strategies business owners are taking are the modification of business models, innovation, technology, international expansion and improvement of services. 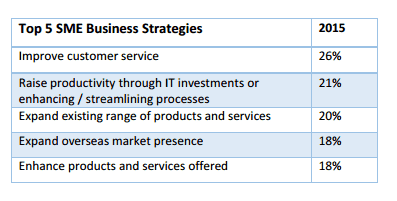 According to Mr. Han, the challenge for business owners is to not just keep up with economic changes but to differentiate themselves from competitors. He explains that businesses should strengthen their core competencies and cater to customer’s needs and fears.

“What separates strategy from tactics in business is really the concept of differentiation. We need to be clear which we are applying. Increasing productivity through technology is not a strategy because it can be copied very quickly by our competitors. Think Grabtaxi, Uber, Airbnb, and Amazon. These are examples of the strategic use of technology where they render their traditional competitors obsolete by becoming different,” he said.

Businesses can enjoy such competition especially that consumer spending is not showing any sign of decline and disinterest. A report shows that in the long-term, the Singapore Consumer Spending will trend around 39286.47 SGD Million in 2020.

Research from Accenture predicts that Singapore will be worth $340 billion by 2020 and a projected compound annual growth of 4.1%. The report considers Singapore as the wealthiest country in Asia on a per-capita basis with rising incomes, with consumer spending expanding at six percent annually that can amount to $176 billion in the next five years. Moreover, Singapore remains to be the “ideal test market for new products” for businesses that are planning to touch other ASEAN markets.

Singapore’s achievement as the easiest city to do business in can be attributed to the uncomplicated procedures and generous assistance by the government.

Despite setbacks last year and the challenges ahead, the Singapore government remains to be one of the most efficient governments in the world according to the Global Competitiveness Report 2014-2015.

This environment is evident in the programs designed to encourage those who are starting a business in Singapore and those who are into business expansions to consistently thrive regardless of the country’s economic condition.

SPRING Singapore, an agency under the Ministry of Trade and Industry, was established to implement programs that provide assistance in financing, capability and management development, technology and innovation, and access to markets.

In September 2015, the National Research Foundation (NRF) announced that it is allocating S$40 million fund to growing high-tech startups in Singapore. Large local enterprises will also receive financial support from NRF when they jump in corporate ventures. This undertaking is eyeing businesses in sectors such as medical technology and engineering to further boost the country’s electronics, disk drives and manufacturing.

There is a call from the Singapore Business Federation for the education system to foster entrepreneurial mindset and culture in students. The organization proposes the introduction of programming, engineering, and robotics much earlier in primary and secondary schools.

One of the programs the government has launched to improve the skills of Singaporeans is the SkillsFuture. The SkillsFuture Council runs an integrated system of education, training, and career progression to support individuals who want to advance their skills whether they are in schooling years, early career, mid-career or silver years. Starting January 2016, Singaporeans aged 25 and above will receive $500 worth of SkillsFuture credits that can be used to pay for the course of their choice. The courses are those approved by the Workforce Development Agency, selected courses offered by the Ministry of Education, some People’s Association courses, and Coursera courses online. Some of the available courses are Startup CEO and World Englishes.

Why should start-ups and business owners be optimistic?

Economists expect GDP to soar by 2.2% in 2016 while CPI-All Items and MAS Core Inflation may reach 0.5% and 1.0% respectively, according to a survey released by the Monetary Authority of Singapore (MAS) in December 2015. “The most likely outcome is for the Singapore economy to grow by 2.0 to 2.9% next year,” says the report. 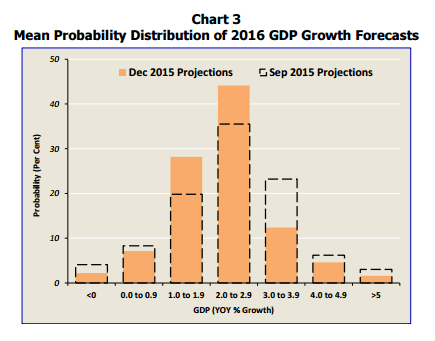 Heng Swee Keat, Minister for Finance, explained the implications of regional and global economic trends on Singapore’s performance in his opening remarks at the UBS Wealth Insights Conference on January 12, 2016. He said that the performance of Singapore’s externally-oriented industries will be subdued amid the modest growth of the global economy.  But he remains optimistic that Singapore can stay “outward-oriented” and explore various opportunities, such as:

Mr. Heng believes that there are risks that Singaporeans must be mindful of but they must recognize and make the most of the opportunities. “What is within the realm of possibility—indeed the realm of necessity—is to have the innovative agility and that outward orientation that will carry us through a range of scenarios,” he said.

Meanwhile, the Committee on the Future Economy (CFE), a newly formed agency by the Singapore government, has announced the formation of five subcommittees that will each focus on one key area of Singapore’s future economic development.

The areas are corporate capabilities and innovation, future growth industries and markets, connectivity, urban development and infrastructure, as well as jobs and skills. According to the press release of the Ministry of Trade and Industry, the subcommittees will be composed of representatives from both the private and public sectors and each will be co-headed by a Minister and a private sector CFE member. The subcommittees are:

All efforts are being done by the government to bolster the economy of Singapore. Economic recovery does not only require policies and funds, but also high-level productivity, unwavering determination, and strong cooperation with all sectors, institutions, and individuals, from CEOs to entrepreneurs.

There are challenges ahead, but everybody is encouraged to look at the existing opportunities. Like what the Minister for Finance said in his speech: “It is not possible to predict the future. We may not be able to predict it, but we can certainly prepare for it.”

Ready to start your business in Singapore?

Richmond provides expert corporate solutions from Singapore company registration to corporate secretarial support to tax and accounting services. Let us assist you in your entrepreneurial journey.